THE GNOMISH MINING TOWN OF WOOPEDU 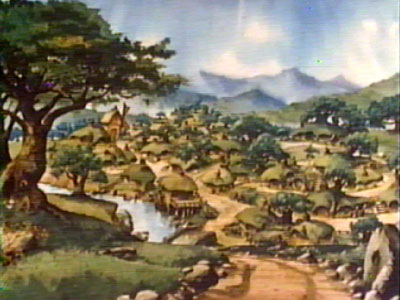 Woopedu lies about 30 miles south of the Stone Tooth, a journey of three days on foot or two days on horseback due to the surrounding rugged terrain and dense forests. Although it isn’t close enough for the characters to use as an overnight rest stop while they explore Khundrukar, Woopedu is still useful as a place to purchase equipment, stock up on supplies, and train be­tween excursions into the caverns.

The town and surrounding areas population of around 1,000 is quite diverse; although gnomes are the largest group, almost any player character race can be found here.

The town’s mayor is Sir Miles Tarkelbee (male halfling noble). “Orc raiders have been pillaging isolated farmsteads and camps in the hills north of the town. The local militia captured an orc warrior left for dead by its comrades and brought it back for questioning. Under the influence of a charm person spell, the orc divulged the location of the monsters’ lair, a lonely hill called the Stone Tooth. I’ll offers a bounty of 25 gp per orc, dead or alive, and the gratitude of the townsfolk to any who can permanently end the threat.”

Sergeant Braeder Swiftwhistle (male gnome veteran) is in charge of the town watch; Constable Dara Lutgehr (female dwarf veteran) is the senior officer. The town watch consists of two full-time guards in addition to its officers. A militia force of around 100 commoners can be mustered in emergencies.

Phedljaer Fiddlefen (male gnome commoner) is the brewmaster at Ardabad’s Ales. Recently run dry. Phidlgee (Phedljaer’s son) tells you he went to the forest to collect herbs for brewing and hasn’t returned since. It’s been close to a tenday.

Teamin Greenleaf (female halfling commoner) is the proprietor of the Unseen Protector Inn and tavern (no ale at the tavern). She will sell you Halfling Pipeweed.

Sister Alonsa (female gnome priest) heads up the town’s small temple (in honour of Palarandusk). Sister Alonsa is assisted in her duties by two acolytes.