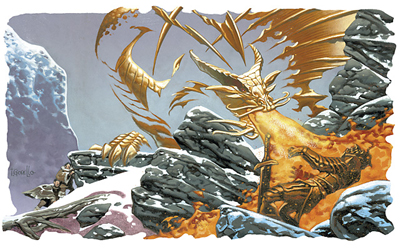 Palarandusk (the Unseen Protector, previously the Sun Dragon) is a male gold dragon who lives in the Sword Mountains on the Sword Coast North. Each time he killed, he wept. He watched over the village of Woopedu, regarding its gnome inhabitants as his children. He preferred to use an invisible and inaudible form so that he could not be detected, but spent his time watching the gnomes and making sure they came to no harm. He was particularly interested in eavesdropping if gnomes were talking about their personal views or opinions. Palarandusk is considered a great protector of the realm, but has not been seen for many lifetimes.