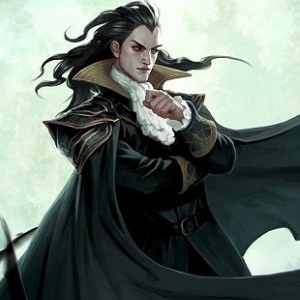 Follower of Ashardalon the Red Dragon. Once the dragon was killed by Dydd, Gulthias devoted his life to bringing the dragon back to the the material plane, convinced he was not dead. His obsession brought him to the practice of necromancy. Feeling a mortal life did not give Gulthias enough time to bring back Ashardalon, he extended his life, turning himself into a vampire.
His obsession brought him to the ruins of the Citadel, a place made many years ago in devotion to Ashardalon. Gulthias hoped there was some information hidden in the Citadel that would allow him to finally bring back the Red Dragon.
He was followed by an adventurer a hunter of some sort, who was able to get the sneak on Gulthias and stake him. The necrotic energy remained, as roots sprouted from the ground, enveloping the body of the once vampire, eventually growing into the twisted tree you saw down there.