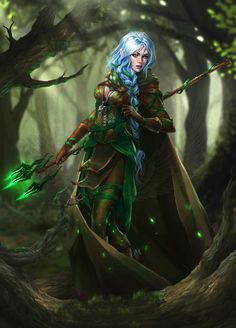 Dydd was part of an ancient line of druid. The ancient druid where considered to be a race of magic adepts that strived to keep balance within the material plane. They believed all aspects within exsistance in the material plane could be be summed up into 2 categories known as Ashardalon and Palarandusk in the Druidic tongue. These aspect must exist in perfect balance or the material plane can collapse.

The balance was disrupted when an ancient tyrant dragon became hellbent on forcing his rule over Faerun using destruction and fear. The dragon grew so powerful, he became the physical manifestation of Ashardalon, wielding power unseen to the realm since it’s inception.

The dragon Ashardalon was creating havoc all over Faerun. Dydd and her druids decided to make a stand. The druids greatly underestimated the power of the dragon, as their ploy to kill the dragon failed, with only Dydd escaped with her live.

Full of regret, Dydd became obsessed with vanquishing the Great Red Wyrm. Knowing she may not be able to kill the dragon that had become so powerful, she decided she would banish Ashardalon. Dydd constructed 3 temples in places of great converging power. She populated the relics with protectors she created by giving the local animal sentient thoughts and humanoid like characteristics. She used these temples to channel the converging power to create a planar rift.

Knowing that she needed to battle the Dragon and lure him into the area of the rift, she petitioned the land for champions to aid her cause;

With the timely help of a Gold Dragon, Ashardalon was eventually banned to the nine hells, but to keep the rift open long enough to allow them to push the dragon through, Dydd had to make a bargain with a greater demon. The pact forever cursed Dydd’s line, giving her descendants a demon touch appearance.