Stubbs is of average halfling height but is overweight from years of indulgence though still very nimble. He wears a beat up tailed leather waistcoat over a plain white shirt. He wears vibrant purple vest. He wears plain looking black pants that the top button no longer does up so he relies on a belt that has a large buckle shaped like a tankard. No shoes as a halfling ks want to do. He has long sideburns and medium length hair that is slicked back “think Luke Perry 90210” that he keeps under a dusty bowler hat.

Stubbs had been living with his cousin “Corkie” for a few weeks now. She’s been a relentless presence around him, preaching the word of Pelor, and trying her hardest to keep Stubbs sober.
Stubbs have been spending most of your time in Oakhurst at the Ol’ Boar Inn, helping the Inn Keeper, Garon, run the pub. Although the pay from Garon was measly, he always made sure that the halfling made it back to Corkie at the end of the night (since Stubbs was almost always pass out drunk by closing time.)
Stubbs created a strong friendship with Garon, as well as with Michel, the town drunk.
One afternoon, travelers came into the pub. They were 3 gnomes travelling from the south. Their cart was raised by goblins not too far outside of Oakhurst. They carried many goods from Woopedu, a gnomish mining community in the Sword mountains. Among the goods was a cask of ale called Ardabad’s Ale. One gnome, a brewmaster, went on about the ingredients that made this Ale so good and tasty. He said it was so delicious that it could be fey-touched.

This ale was stuck to Stubbs’ brain now, you wanted to try it. He often fantasized of spiriting away in the night to travel to Woopedu to get some of this ale. Stubbs’ wanderlust was fully setting in.
One day he overheard a conversation between Corkie and Sir Bradford (a Paladin of Pelor). Sir Bradford said he was assembling an adventuring party to go down into the Sunken Citadel. Knowing that the goblins of the area used the citadel as a stronghold, Stubbs volunteered to accompany Sir Bradford, with his main intention on finding the cask of Ardabad’s Ale that the goblins had stolen, but you played it off to Corkie as being a good deed in the eyes of Pelor.

Corkie would not have it though, saying she was enlisted in protecting Stubbs by his parents and home village, and sending him into an underground citadel was not part of that plan. The Adventurers left without Stubbs, but he could not stop thinking of the wondrous ale.

Stubbs decided that he would follow the group, but stay unseen, so Sir Bradford would not send you back to Corkie. He planned to stay sober for a night, but play it off as if he was once again pass out drunk. Garon returned you at night’s end to Corkie who left you to sleep off your inebriation. Once Corkie fell asleep, Stubbs grabbed his gear and headed off to the citadel.

LOST IN THE CITADEL

Unable to catch up to Sir Bradford’s party, Stubbs was eventually captured and imprisoned by the goblin clan residing in the citadel. He was not long after freed by an adventuring party and decided to join them as they delved deeper into the citadel.

After coming up empty handed from the underground citadel in his pursuit to find Arabad’s Ale, Stubbs decides to set off to find the source of the Ale in Woopedu with his new found friends. The group find the brewery in Woopedu, but Stubbs is dismayed to discover the brewmaster has gone missing.

IN THE FORGE OF FURY 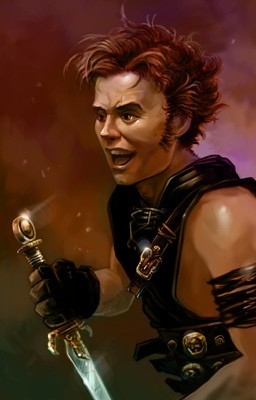