Large, dimwitted Bugbear with a positive outlook on life.

Gatherer and messenger for the Starry Eyed Monastery.

Has a messenger turkey named Kevin that had recently gone missing.

Assault on the Monastery

After the mysterious disappearance of Kevin, David returns to the monastery only to find it in ruins. Many of the initiates and temple hands are found slain. The whereabouts of the Abbess is unknown, but her private chambers have been ransacked.
The body of Kevin was not found here with the others, but David is grim in his hopes that his companion is alive, as Kevin would have likely returned to the monastery before the attack occurred.
Without the help of Kevin, David had been lost, not being able to easily locate other members of the Starry Eyed Monastery.
Lost, he was picked up in the forest by a druid of the Emerald Enclave and sent to the City of the Dead. The EE will help him investigate what happened at the monastery.

After helping Anakis in defeating the necromancer in the City of Dead, The Enclave promotes the Bugbear and send him to work for Jeryth Phaulkon as a groundskeeper.

Although still mourning the loss of his companion Kevin, David finds solace in a new animal companion, as small white cat he uses to send messages through. David named the cat Ash after his trusted friend Ashes of the Moon. 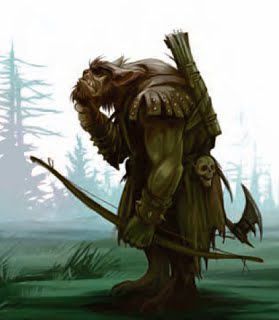