Ashes of the Moon

CHASING DOWN THE DROW

After receiving a tip from a source at the Yawning Portal, Ash finally caught up with his mark at a small town called Longsaddle, a small town just north of Triboar. Ash has been tracking this drow for the last 3 day since Longsaddle. It seems that the Drow if headed for a small town called Oakhurst. Ash is unsure why the Drow is interested in this town. He is also unsure that this is the target he is supposed to pursue, but he fits the description perfectly. So he sits back and watches. The Drow named Content Not Found: grisduin-drukroz is accompanied by a strong looking Dragonborn named Xanath. Ash knows that even with the element of surprise at his disposal, he may not be able to take down both men, so he will wait for his opportunity.

Ash puts on a ruse of a friendly companion and adventurer to gain the trust of Grisduin and Xanath. He will wait for an opportune time to strike at his mark. Complicating matters, the group is accompanied by more adventurers, Anakis, Quin and later Stubbs. Ash is also confused by the demeanor of Drow, unlike many of his kind, Griduin is moral and compassionate. He has also saved his life in the Citadel.

Once outside the citadel, the group is stalked by a turkey. Not realizing the familiarity of this turkey, Ash decides that is will provide a good meal for the party. Upon slaying the fowl, Ash notices that this turkey is familiar. It is Kevin, the pet of his friend fellow guild member David the Bugbear. David often used Kevin as a messenger. Ash noticed a small scroll on the dead turkey and reads the contents, which complicate matters even further.

RESURRECTION IN THE SINKHOLE

Upon questing for Durgeddin’s weapons, Ash is eaten alive by a Roper deep within the forges depths. He is then resurrected by a magical caterpillar, a gift that was given to Grisduin Drukroz by his matron, the Goddess Eilistraee.

Ash aids Grisduin in the finding the Promenade of the Dark Maiden only to find it has been turned into a spider hatchery by lolthian drow. The Sunless Six kill the drow and open the moonspring portal at the back of the temple. They are transported to the Dancing Dell in Ardeep forest. There Ash meets Grisduin’s adopted children, and realize that he was resurrected by Graeda’s gift by Grisduin. Ash has found his matron.

Ashes of the Moon 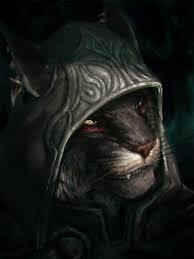