Anakis reports back to the Emerald Enclave after defeating the necromancer in the City of the Dead. The high druids are impressed by Anakis, and promote her to the Circle of Alluvium. Anakis is now a sworn protector of the wilderness of Faerun.
The group then decide to seek out information on a possible church of Eilistraee in Waterdeep. Xanath explains the best place to find information is at Yawning Portal. 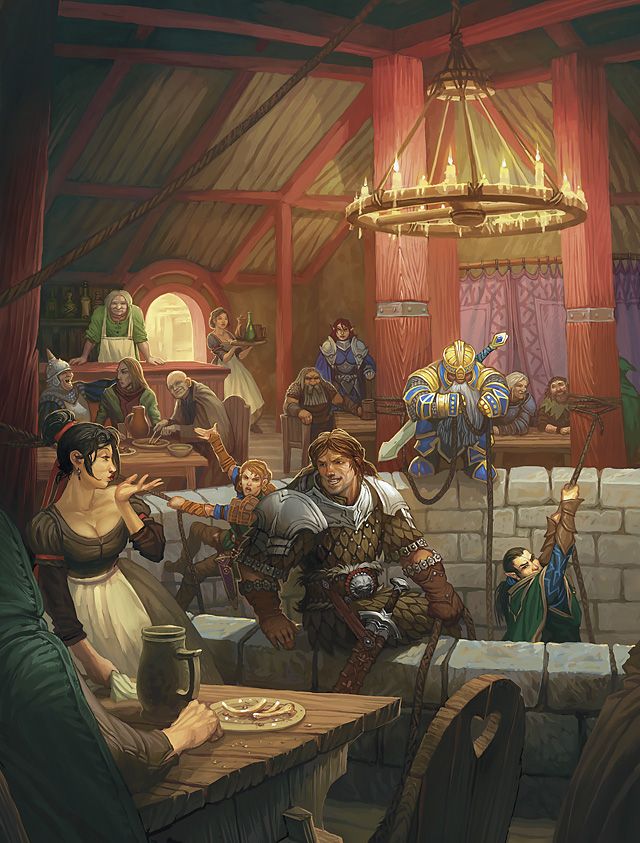 At the portal, Ash talks to the proprietor, Durnan. Durnan explains to him if he wants information, there is no better man to talk to than Volo. Durnan points out Volo, who is in conversation with Xanath.
Volo ends up selling 2 of his books to Ash, Volo’s Guide to the Churches and Shines of Faerun and Volo’s Waterdeep Enchiridion.
Grisduin sees a well dressed Drow and decides to start up a conversation. The Drow seems to think that Gris is looking for membership into the Bregan D’aerthe. He introduces himself as Fel’rekt Lafeen. Fel’rekt tells Grisduin to find Zardoz Zord, captain of the Eyecatcher, docked in the harbor.
The group then take a room at the Yawning Portal for the night.
The group meet the following morning in the tavern. A fight breaks out between a half-orc and a few thugs. Grisduin attempts to enter the fray to help the outnumbered half-orc, but soon realizes that she has already handled the thugs. Durnan breaks up the fight and throws out the aggressors.
As the crowd begins to dissipate, suddenly a loud snarling noise crashes from the portal. A half dozen stirges fly out from the portal followed by a troll. Grisduin and Ash rush to attack the Troll as the others fight off the stirges. Ash kills the troll, sending it back down the well from which it came.
The group then decide to head to the docks to find an entrance to Skullport, where the Promenade of the Dark Maiden, a central temple to Eilistraee lies.
Once they reach the dock Ash asks a young fish monger to the location of Skullport. The point them in a direction down the shoreline. The group venture out, but the shore is still quite wet and muddy, so they decide to walk in the streets for a bit.
As they walk, Quin notices 2 ragged fellows huddled by a fire, but eyes a very nicely polished rapier under the dirty cloak. The men attack the group, and are flanked by another individual with a spiked chain. A fight ensues, and the group is able to take down 2 attackers. Seeing his odds of survival fall drastically, the last man standing tries to flee, but is put down by a pair of darts. Anakis notices a dark figure on the roof that the darts originated from and alerts the group. Ashes moves to pursue.