The adventurers decide to take a break in Burdug’s layer before moving on to their next course of action. They decide to head down the stairway into the Glitterhame, however, not being cautious, the group is bombarded by a flock of flying vermin known as stirges.
The group handles the threat, but as Xanath yells down to Ash, who has found himself already deep with the cavern, he attacks a second flock of stirges. The group rushes down to assist their ally, with varying success.

Once the stirges are turned away, the group head into the greater cave system. As Ash and Quinn scout ahead, they spot a few lizard-like creature. Unnoticed, the group is able to sneak up and kill the pair of troglodytes with ease.

Upon investigation a make-shift gate, the group is cannon-balled by a large brown bear, which runs past the group and into an adjacent tunnel. Ash stalks behind the bear, and finds that the tunnel reaches out to the surface.

The group investigate further into the cave system, and come upon the Glitterhame. A great cavern that is glimmering with faint phosphorescence. The cavern floor is covered with glowing fungus, that the group discover is harmless. 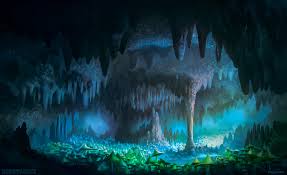 The group follow a flight of carved stone stairs that lead up to the western ledge of the Glitterhame. Beyond the ledge they discover a large cave adorned with a couple dozen large stone sepulchers. They reason that these must be the final resting place for Durgeddin’s tribe. They loot the tombs and return to the Glitterhame.

As they venture along the northern edge of the large cave, they notice a creature lurking within a rockfall.