The Dead Mage of Khundrukar

The adventurers regroup and decide to head forth into the dwarven quarters. Fin enters into a room with a large well in the center and hears a low distance voice mumbling curse. As he glances, he sees a faint apparition, and turns from the room. Xanath then decides to enter and talk to the ghost, but the parley quickly turns sour.
Ash rushes up to the ghost, swiping his claws at the phantom, until the entity overpowers his will and possesses the tabaxi. Ash, now possesses turns and starts attacking his allies. Using a tongues spell, Xanath is able to converse with the dwarven ghost, but is unable to convince the entity that they are not just looters. 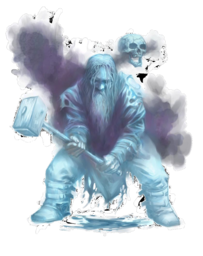 Gris then decides to present his new weapon, ’winter’s chill’ to the ghost. Baring the mark of Durrgedin, the ghost’s interest is peaked. He asks Xanath where they found the weapon.
Unknowingly, Anakis enters into the room and decides to attack the possessed Ash. The possessed tabaxi’s turns and fights Anakis. Quin then rushes to the ghost and follows suit and lays 2 other weapons baring Durrgedin’s mark at the feat of the possessed Ash. The group finally persuade the ghost that they mean no harm and are not looters, as Anakis shows the ghost her trophy necklace of orc penises.
They convey to the ghost that they have broken the curse over Durgeddin, by defeating an orc wight guarding over his soul. The ghost then relays that he was Durgeddin’s high mage, named Anduril. He was the one responsible for the enchantment on the weapons. The group then lead Anduril to Durgeddin’s remains. Satisfied, Anduril’s ghost can now finally pass over. He thanks the group, and tells them that the threats he has put up in the halls are now gone. He does however warn the group of a succubus he had summoned that overpowered him that he thinks still lurks within the foundry. Anduril also explains that one weapon in the 4 season’s enchantment remains called Summer’s Rage.
The group then venture forth in the dwarven halls, clearing rooms and finding many traps that Anduril has disabled. They finally come upon a large open room with 3 doors leading off them. Quin investigates and finds a secret door. Behind the door is a narrow hallway that Ash and Quin head down to investigate. The hallway ends, but they can hear rushing water behind the door. They find another secret door in the wall and they are led to a great opening at the top of the waterfall. They find the chain ladder that leads down the side of the wall deep into the chasm.

Quin and Ash return to the group. Quin then enters into a room which looks like a library. A young, beautiful dark haired woman is sitting with her back to Quin, weaping. Quin leaves the room and relays to the group that she may hae found the succubus Andril warned them of. Xanath then decides to enter to room, but is quickly charmed by the succubus. She tells them that she is trapped here by a wizard that dwells deep below. She encourages the group to defeat the wizard, but pleas that Xanath stay with her, ‘to protect’ her. The group, except Xanath, see though this ruse and the succubus changes form and attacks the group in desperation. The group defeat the fiend, and decide to investigate the remaining chambers before heading down into the chasm.

What Lies in the Black Lake