The Sunless Six find themselves in a long hallway. The hallway is bound by 2 pits on either side. The floor, walls and ceilings look to have a sheen to them. Ash ties a rope to himself and leaps over the first pit. Luckily, he is able to maintain balance on this frictionless floor. As he approaches the pit on the other side, he successfully leaps over. Holding the rope tight, the rest of the group cross, but Grisduin slips into the pit and is wracked with pain. They pull their comrade out, and Anakis gives Grisduin a potion. Gris eventually fights off the disease.
The group then venture through more hallways and come upon a room with a floating river running through it. Xanath scouts the river, but turns back after he find it too far. The group then jump into kayaks to travel the river. As they come to the entrance to another room, Ash leaps from his kayak and bolts into the seeing a group of armored men preparing nets to trap the Sunless Six. He disrupts the group enough to make the trap ineffective. The rest of the group enter. Anakis and Xanath take out half the enemies, as Grisduin and Quin go into melee with the leader of the group.
As the fight continues, 9, the group’s newly acquired Flesh Golem starts going beserk. The group fell all the enemies, as Xanath tries everything in his power to save his befriended golem. He is unsuccessful and the group need to put 9 down before he becomes too large a threat.
The Sunless Six acquire a key from the fallen Sir Bluto and head to a locked door they found earlier. They enter into the chamber and discover a huge terrarium containing many levels and different creatures. They see a door in the bottom layer.
Feeling unfit to the challenge, the group decide to rest in a secret hallways they found earlier. 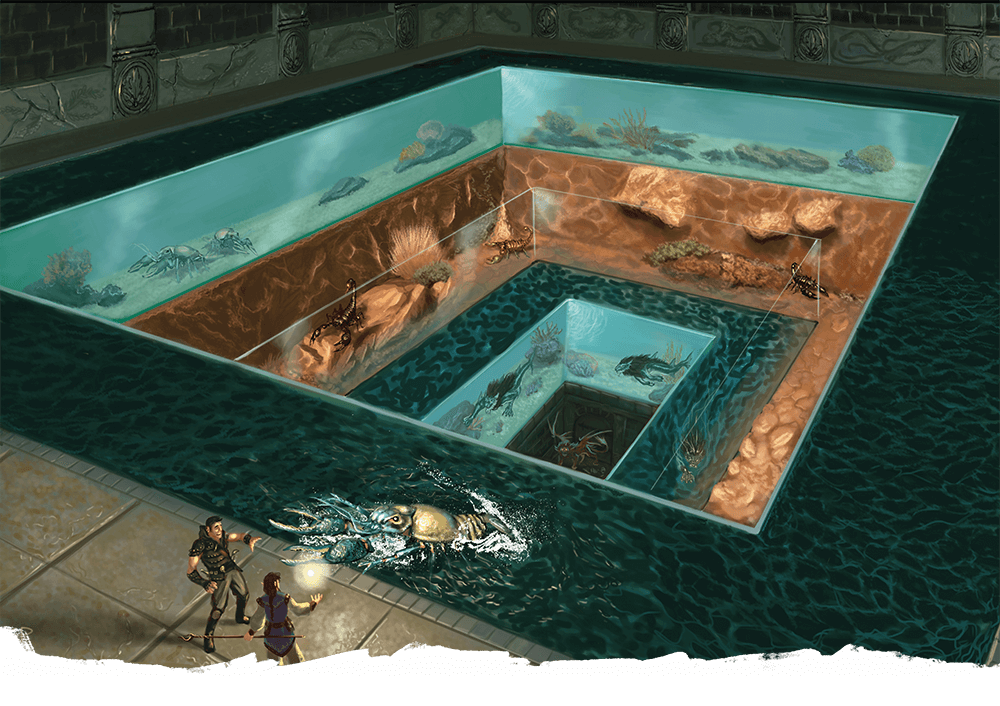 The Oni and the Grandmother Tree 20th day of Marpenoth

The Terrarium 18th Day of Marpenoth