The Sunless Six leave the liar of the Kelpies and head east down a corridor. They discover a section of the floor ahead spinning and greased. Ash bounds off the walls to avoid the grease and discovers a door. The curious tabaxi opens the door and is hit by a mass of webs. The rest of the group come to Ash’s aid, busting through the the webs into the room.
A mage transforms into a Werewolf and the the group does battle with her and her lover in close quarters.
Before the melee ends, Ash ducks out into an adjacent room.
Once the group subdues the attackers, a greasy bear appears from the hallway. The bear transforms back into it’s true form, Anakis.
Ash barricades himself in the room and claims he is taking a shit so he can loot the room on his own. As he opens a runed chest, he is fittingly hit by stinking gas. Ash exits the room after pocketing some gems. Once the smell dissipates, the group enter the small quarters to find the room abound by illusionary magic. They take rest of the loot from the chest and question Ash, who reluctantly gives up his gems.
The group decide that this is a good place to rest. They barricade the door. As they rest, they hear 2 undead creatures coming towards them. By utilizing the greased floor and Xanath’s fire, they quickly resolve the problem.
The Sunless Six then head back towards the Kelpie’s lair to investigate another hallway moving north. They push open a heavy door only to find a second door right behind it. The push open the second door and find another door before they reach a hallway.
They prop the doors open using caltrops. Quin creeps up the hallway to find herself at the center of a boiling volcanic lake which is held back by a thin field of some kind. As she edges closer she discovers a large domed area with a skittering of a large creature ahead.
The group then approach and see a huge giant crab, which looks to be guarding a treasure. 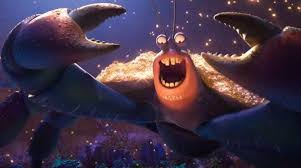 The adventurers act fast and take down the crab before it can react. They then investigate the large chest. Seeing no apparent traps, they open the chest and discover Wave the first of the sentient weapons they were sent to retreive.

Into the Wizard's Mouth 15th day of Marpenoth

The Tattersail 14th day of Marpenoth