The adventurers are confronted by a pair of gricks hidden in a rockfall. Xanath quickly casts entangle, keeping the gricks immobile. The group then proceeds to hack, slash and thorn whip the gricks to death. The commotion garners the attention of 4 troglodytes that aggressively rush in to do battle with the adventurers. 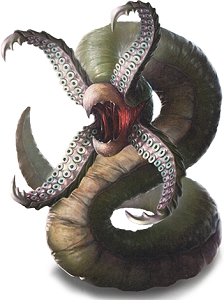 The group take down the threat, but Ash is poisoned in the process. Anakis discovers she has an app for that, and rids Ash’s ailment with a jar of Melf’s Acid Arrow.
The group then investigate the Glitterhame and find a sturdy iron door with Durregedin’s Rune on it. They notice that there is a lock on the door and decide to see if they can recover the key. They explore toward a small cavern of rushing water. Ash investigates the cavern and notices the rushing river ends in a waterfall, that falls 60’ in to a pool below. Ash decides to dive into the pool, and Grisduin follows by repelling himself down with his rope. Grisduin’s grip fails and he falls into the pool. Both are starting to be swept away, but are able to recover and pull themselves out onto the river bank as the rest of the group meet them, using the much easier stairs they found.
Quin investigates some old storerooms of the dwarves that the orcs did not raid. Any supplies in these rooms have expired long ago. Just as Quin and Ash investigate the furthest room, the rest of the party start to notice movement in the center of the room they occupy.