The Sunless Six start questioning the captured Kuo-Toa. They inquire about a temple, and the Kuo-Toa archpriest replies that there is only one god, the god of his people named Blipdoolpoolp. The shrine lies deep in the river and cannot be found. Ash decides that this fishman has no information and releases him from his manacles. Upon release, the Kuo Toa unleashes the spirit of his god, but as he tries to flee into the river, he is stuck dead by Anakis’ giant wasp.

The group then proceed to venture down another cramped tunnel. They send Quin ahead. After a long creeping walk, she finally finds a change in the tunnel. The stone of the walls and floors are more worked and sculpted. As the rest of the group catch up, they discover a door. They push the door open to reveal a small chamber. In the chamber there is a large stone that seemingly has crushed a goblin. The group deduces that the room was trapped and set off by the goblin. At the end of the chamber is a heavy stone door. Grisduin reads the elvish script on the door and pushes the door open with ease. Beyond the door is a large room with marble pillars and a few sculptures of female elves dancing naked, holding a sword. 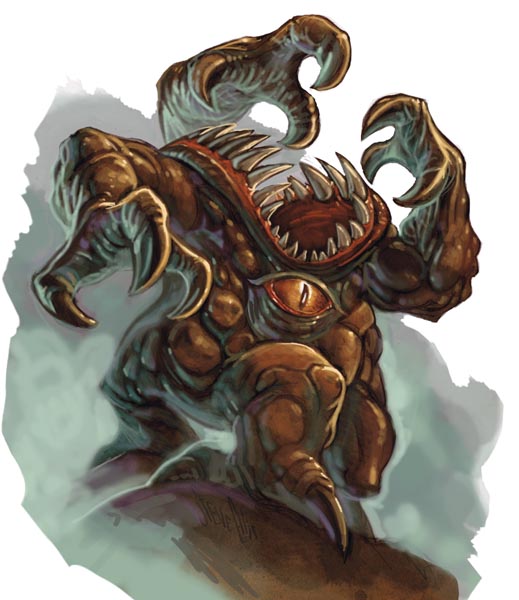 In the center of the room lies a silent earth elemental. Xanath decides he will awaken the Big Xorn by attacking it with his flying broom. His plan works, but the Xorn quickly attacks the broom, crushing it into splinters in it’s giant jaws. The group then enter to do battle with the elemental. Xanath gets revenge on the Xorn for destroying his broom by disintegrating it into dust with a lightning bolt.

The adventurers investigate the room, finding nothing of value, but deduce this must have been a sculptor’s workshop. They proceed out a door on the other side of the room. Beyond the door, a short tunnel leads back to the Sargauth River. At the edge of the river is a gondola manned by a teifling skeleton. 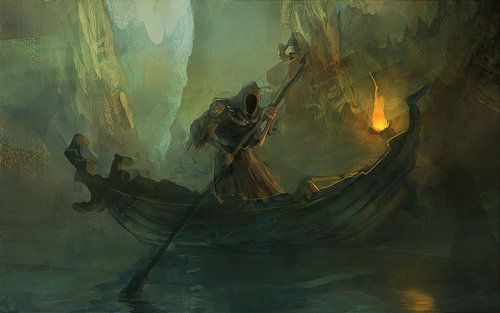 The group pay the ferryman who proceeds to take them up the river. Upon leaving the shore, Quin notices an intense man with white hair and long beard staring at her with piercing eyes. She points this out to the group, who claim they cannot see the old man.
As Quin looks back, the man dissipates into smoke. After investigating the shorelines, the group decide to search down the creepiest, spider web filled howling tunnel. Not far down the tunnel the group encounter a drider seemingly pacing frantically around a narrow chamber.