The adventurers climb down to the entrance of the citadel, ready to begin the adventure. Ash triggers a trap door near the entrance an discovers a person, breathing at the bottom of the trap. The group retrieve the victim, and revive her.

She introduces herself as Quin Zel, a half elf adventurer. She is vague on her reasons as to why she is in the citadel. The group is put off by the half elf’s demeanor, and strange habit of talking to herself. Nevertheless the group offer Quin to join them in their pursuit through the underground citadel.

The group come upon a finely made door, adored by the engravings of a dragon on it’s surface. Xanath is immediately interested in knowing what lies behind this door, but he cannot open it. He notices a keyhole in the mouth of the rearing dragon.

They decide to explore further into the citadel, and are met by a weeping kobold named Meepo. 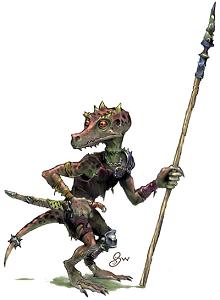 Meepo is devastated that he lost the clan’s dragon, a small white wyrmling. He explains that the fueding goblins stole the dragon. Meepo offers to safely bring the group to his leader, Yusdrayl. In exchange, they promise to help Meepo find his dragon.

At the door of the Sunless Citadel Session 1