The Sunless Six find themselves surrounded with no other option but to surrender to the Xanathar’s Guild. They are taken captive and put into holding cells.
Sharing the cells with the group are 2 other captives, a halfling named Samara and a half-elf named Richard. The two relay a plan to the group to escape and take down the lair in the process. The group reluctantly agree.
Anakis wildshapes into a rat and scouts the area. In scouting she retrives Quin’s thieve’s tools, to aid in their escape.
Members of the guild return and take Grisduin to have audience with the Guild Master. Upon his arrival, Grisduin is greeted by his former slave master, Baron Von Straedler. The Baron tells Grisduin that he owns him and that he will be fighting for him in the tournament.
The next day the group are escorted to the fitting pits. The crowd is rowdy and blood thirsty.
The matches are set and Grisduin faces off against an Orog. The Orog comes on strong, but is no match for the Dancing Devil’s prowess with the sword. 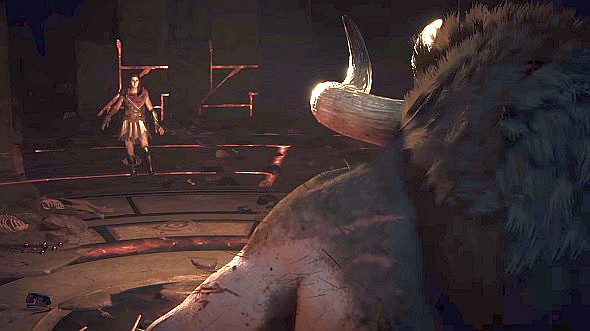 The next fight matches Richard with the returning champion, a Minotaur. Richard then proceeds to shift his form into a hulking barbarian. The Minotaur charges “Dick” with intent to gore. Dick sidesteps the assault and proceeds to relentlessly beat the Minotaur to a bloody pulp with a warhammer.
Now Grisduin must face the changeling. To everyone’s surprise, Dick throws the fight as an attempt to distract and enrage the crowd. Just then, Aesino appears from the darkness and enters the ring to appease the crowd. He challenges Grisduin to a fight!
Aesino tries to cast a spell, but to no avail. He did not realize the fitting pit is surrounded in an anti-magic field. Quin goats her father, as a look of panic washes over his face. Grisduin charges in. Aesino, not used to fighting with his magic is taken aback, as Grisduin has him on the ground for a final blow! The crowd is errupting, as a shot flies through the air as Samara tries to take down a pillar. The shot misses wildly. Seeing this, Xanath breaks through the crowd and unleashes his fire breath in the direction of the pillar. The flames hit a hidden stash of smokepowder and the column collapse. The crowd panics, and the group escape through a side door. As they run through the center chamber, Grisduin launches magic missiles at more smokepowder hidden throughout the chamber. They escape into a room as the great hall begins to collapse. Covering their tracks they blow more powder hidden in a doorway. They then reach the final room with the plant beholders, acting fast, Xanath launches a firebolt into the room and the group takes cover as the contents of the room explodes!
The group then dash through the room and into a tunnel that Richard confirmed as the way out. As they sprint down the narrow tunnel the rooms behind them collapse and they are chased by smoke, they continue to run, but find the head of the tunnel has also collapsed in on itself. They are now trapped.

Into the Liar of the Xanathar 28th day of Elient